Check out this post from Linda’s Book Bag Blog featuring the book The Puppet Show by M.W. Craven

My enormous thanks to M.W. Craven for arranging to send me a copy of The Puppet Show in return for an honest review.

The Puppet Show is published by Little Brown imprint Constable and is available for purchase through these links. 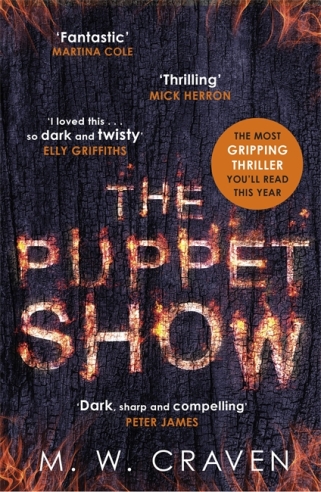 A serial killer is burning people alive in the Lake District’s prehistoric stone circles. He leaves no clues and the police are helpless. When his name is found carved into the charred remains of the third victim, disgraced detective Washington Poe is brought back from suspension and into an investigation he wants no part of . . .

Reluctantly partnered with the brilliant, but socially awkward, civilian analyst, Tilly Bradshaw, the mismatched pair uncover a trail that only he is meant to see. The elusive killer has a plan and for some reason Poe is part of it.