Please welcome Mary Adler to the cafe and bookstore and to introduce her books here with her recent Kindle edition of, In the Shadow of Lies: An Oliver Wright WW II mystery. 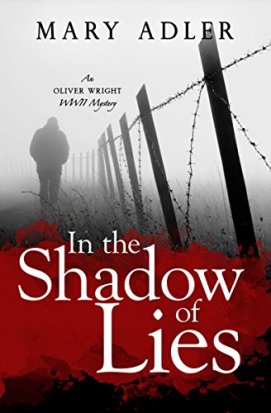 Richmond, California. World War II. Marine Lieutenant Oliver Wright comes home from the war in the Pacific injured and afraid his career as a homicide detective is over, but when black soldiers are suspected of killing an Italian Prisoner of War, the Army asks Oliver to find out the truth.

He and his canine partner Harley join forces with an Italian POW captain and with a black MP embittered by a segregated military. During their investigation, these unlikely allies expose layers of deceit and violence that stretch back to World War I and uncover a common thread that connects the murder to earlier crimes.

In the Shadow of Lies reveals the darkness and turmoil…